December 1st, 2014 was a day of inaugural meetings for municipal councils across the Province of Ontario. The inaugural council meeting in the Township of Muskoka Lakes, held in the Port Carling Community Centre, began with the singing of O Canada, led by Jenna Swadzbe, a grade 8 student from Glen Orchard Public School. The meeting was called to order by interim CAO, Clayton Harris. Clerk, Cheryl Mortimer introduced the 2014 to 2018 Township of Muskoka Lakes council and welcomed them. Barrister and Solicitor, James McIntosh, led the council through the oath of office and swearing in ceremony. As municipal clerk, Cheryl Mortimer then had the honour of presenting Mayor Furniss with the Township Chain of Office, placing it around his neck. With the new council sworn in, Reverend Sue Woods was called on to give an invocation. The Township’s municipal officers were then introduced by Clayton Harris.

Mayor Furniss gave his inaugural address welcoming the entire council and repeated a campaign promise of very shortly holding town hall meetings in each ward as well as one in the GTA. He complimented the township staff on their hard work plus thanked the many volunteers for all their work around the township. Mayor Furniss thanked his sister Colleen and “Aunty Mom” for being in attendance today as well as his wife Carol for her continued love and support. To read Mayor Furniss’s full inaugural address click here  – Inaugural Address – 2014

Mayor Furniss then announced that Ward C municipal councillor Jean-Ann Baranik would be his Deputy Mayor.

This thirty minute inaugural meeting was adjourned just after 12 noon giving time for council to mingle with the audience and enjoy a wonderful assortment of sandwiches, cookies and coffee that was served. 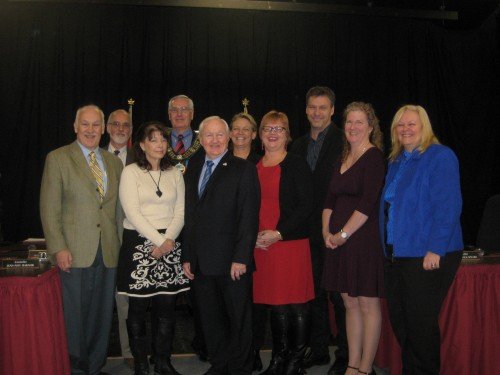 About the Author: Muskoka Ratepayers