During the Second World War, Camp Borden near Barrie was one of the main centres used as part of the British Commonwealth Air Training Plan.

On December 12, 1940, during a snow storm that included very hazardous winds, Leading Aircraftsman Clayton Hopton took off from Camp Borden on a training flight and disappeared. His body was later found in the wreckage of his plane southwest of Camp Borden.

The next day, although the winter weather continued to be treacherous, two Northrop A-17A Nomad aircraft, 3512 and 3521 took to the air from Camp Borden to join other aircraft in the search for the missing aircraft. In this type of aircraft, the pilot and the observer sat back to back. Obviously, the observer faced the rear of the aircraft. Nomad 3512 was piloted by Sergeant Lionel Francis (Royal Air Force) with Observer Leading Aircraftsman William Gosling (Royal Canadian Air Force). Nomad 3521 was piloted by Flight Lieutenant Peter Campbell (Royal Air Force) with Observer Leading Aircraftsman Theodore Scribner Bates (Royal Canadian Air Force). Bates had only just received his wings. In fact he had not had time to sew them on to his uniform, so had put them in his pocket.

Shortly before noon, having radioed that they were en route to refuel at the Muskoka Airport, these Nomads, flying in formation, somehow collided midair. They then disappeared into the deep waters of Lake Muskoka.

A search was soon launched for these downed aircraft. Early in January 1941, divers diving through the ice of Lake Muskoka were able to confirm the location of the wreckage of Nomad 3512 in 32 metres of water. One diver, Dennis Coffee, dove past his limit and died later. His wife had to sue the Air Force for his share of payment for the recovery effort. In those days, the divers’ equipment was rudimentary. In fact, they used a car head light for illumination! It was only with great difficulty that the plane was raised to the ice covered lake by a rope attached to the tail. Unfortunately, this wreckage ended up in a wrecking yard where it was eventually scrapped.

At least not for 71 years. Here is the story.

In 2004, while searching for artefacts for the Norwegian Museum at the Muskoka Airport, Matt Fairbrass began to hear rumours about planes that had disappeared into Lake Muskoka during the war. He heard that Peter Campbell and George Harper who been trapping beside the lake had actually seen a crash and witnessed 2 planes falling into the lake. In the meantime, Bil Thuma and John Bowlby founded LAMP – Lost Airmen of Muskoka Project. Matt Fairbrass and Al Bacon (also directors of LAMP) dedicated their spare time to searching for the wreckage of Nomad 3521. Although they then had a rough idea where the wreckage could be, their search continued for hundreds of hours.

During the fall of 2005, the wreckage of the aircraft was detected using side scan sonar operated by marine geophysicist and hydrographer Ken McMillan of McQuest Marine. Thuma, Bowlby and Fairbrass were all on board during this incredible discovery.

In 2007, Fairbrass and Bacon contacted the Ontario Provincial Police. The OPP Underwater Search and Recovery Unit (USRU) took over the search. Using a variety of techniques which included multi beam sonar, they were able to map the lakebed surrounding the crash site in Lake Muskoka off Browning Island. While diving in the area in July 2010, the USRU team located the aircraft. The USRU contacted the Directorate of History and Heritage at the Department of National Defence to plan the recovery of the airmen. Divers were able to retrieve the remains of the airmen, leaving the aircraft itself below.

Seventy years of exposure to algae had taken a toll on the wreckage. However there remained ghostly traces: remnants of a 38 calibre hand gun, a well preserved fountain pen, and a log book still partially legible. Also, inside a gauntlet was a nearly perfect gold ring belonging to Bates. Campbell’s cigarette case was discovered along with a pilot’s watch, RCAF cuff links, ID tags, and a shoe. Remnants of uniforms and uniform brass buttons were also found. However, the most incredible find was both officers’ wings, in excellent condition. All these items were carefully restored and returned to the families. Also discovered were two items that clearly did not belong at the crash site– a minnow trap and a very large anchor!

News of this discovery was kept private to maintain the integrity of the site. Unfortunately, a select few knew of this location, and as a result certain parts of the plane went missing.

It was a collaborative effort which included Canadian Coast Guard, RCAF – 8 Wing Trenton environmental officers, public relations officers, Bracebridge OPP and the Underwater Search and Recovery Unit. However, nothing would have happened without help from several local people led by Matt Fairbrass who was instrumental in the entire operation.

Also involved were two local businesses: Coulson Brothers Scow Service and Brent Quarries. Ron Brent, himself a pilot, loaned an enormous truck with a crane – operated expertly by Keith Wice -that lifted the wreckage carefully onto the large barge provided by the Coulsons. It took enormous skill for Keith Coulson and his assistant Ken Robinson to manoeuvre the huge barge into position. The weather was very nasty. All the giant 2000 pound cement block anchors did not hold. At one point the barge drifted off the site and therefore it was necessary to retie and reposition it. Neither Arnie Coulson nor Ron Brent were actually at the site during the recovery. However, they were at the Coulson’s dock to welcome the barge carrying the 8000 pound wreckage which was as fragile as aluminum foil.

The first step was site recognizance. Divers determined the outline of the area where the plane lay, and marked it with buoys (see figure 1 below). The wreckage was mired in silt that had to be carefully removed. Next, divers strategically attached straps to the wreckage, so that it could be gently raised to the surface. The plane was in 5 pieces and it lay well bogged down in silt in approximately 90 feet of cold, dark water. A nearby zodiac bobbed on the choppy water. It served to house the generator which remotely operated two large bright underwater lights. The divers, experts from Recovery and Salvage Service based in Nova Scotia, also used several boxes of glow sticks to help them identify parts of the wreckage.

As well, drifting in the vicinity was a barge accommodating several members of the press on hand to capture this historic event. Many people were able to view all this in real time.

The first piece to be brought to the surface was the cockpit (figure 2). Then came the starboard wing that still had the remains of the aircraft’s gun. The next to be raised was the main fuselage with the portside wing still attached, followed by a wheel and the tail. The 1200 pound engine was buried under 4 feet of “goo” and was held firmly in place by suction. After several tries to raise it, Keith Coulson announced that he felt the crane had hooked something. Up it came! Two of the propellers (figure 3) were bent back, one was straight. This indicated that the pilot had followed procedure and turned the engine off prior to the crash.

Securing and stabilizing the fragile, awkward wreckage for transport on Brent’s truck was tricky, took many hands and much innovation. The aircraft was handed over from the Department of National Defence to the National Air Force Museum personnel in a brief ceremony at Pride of Muskoka. From there it was taken to Brent Quarries where it was on display and then stored safely overnight. The following morning it was transported on the same Brent Quarries truck to the National Air Force Museum in Trenton Ontario. Ron Brent and Matt Fairbrass actually followed the truck to Trenton to make sure nothing fell off.

There is only one other Nomad aircraft left in North America (figure 4). The tentative plan for the display of the wreckage is to rearrange its pieces – as a crash site – under water at the Trenton museum, in the exact configuration that it was found at the bottom of Lake Muskoka.

While this is the conclusion of one chapter, there could be more. The Lost Airman of Muskoka report that there are more downed planes in the Muskoka lakes. Who knows when the next chapter will begin or what it will be?

Are you aware that the Royal Norwegian Air Force trained at the Muskoka Airport in Gravenhurst during the Second World War? Their facility was called Little Norway.

Did you know that there is a museum at the Muskoka Airport terminal owned by the government of Norway? It is called the Little Norway Museum and is open daily year round. Definitely worth a visit!

Special thanks to Matt Fairbrass for giving me invaluable help during my writing of this article. The Lost Airmen of Muskoka Project is really his story. 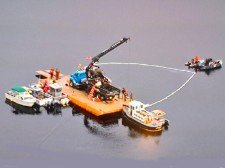 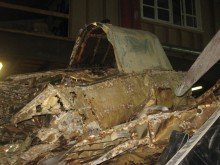 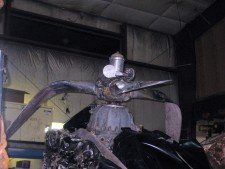 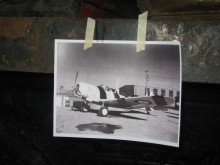 About the Author: Liz Denyar